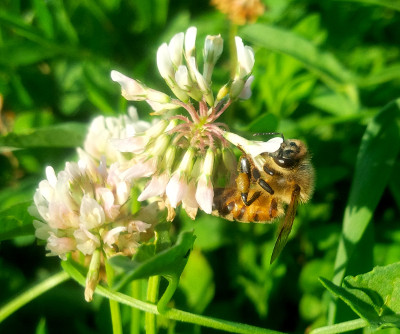 In 2016, I was hired to start an apiary for someone else. I didn't have any experience or knowledge, so they also paid for me to attend beekeeping classes. Here in St. Louis, we have a number of good resources for learning. Besides Online resources, my personal experience is informed by experts at Three Rivers Beekeepers, The St. Louis Beekeepers, and Eastern Missouri Beekeepers Association.

Beekeeping has a tradition of mentorship. There is a lot of science involved in beekeeping, but also a lot of myth and legend. As much as we can measure and weigh what is happening in a hive, a wise beekeeper can also intuit what is happening, like a person can tell when it will rain. People talk about their hives like cattle and pets alternatingly. They talk about colonies and queens from past seasons like fishermen talk about The Big Catch. The new beekeeper knows nothing and has seen nothing. So a mentor can advise their knowledge, and share their experience—preferably in the hive, through observation and action together.

It turns out that a lot of beekeepers are white, retired old men. They also as often as not are named "Bob"! I fit in well enough, being an old soul and going by "Robert". My mentors reasonably called me "Bob" now and again.

I'm going to write about some things that surprised or intrigued me about bees.

There are three casts in the hive: queen, worker, and drone. 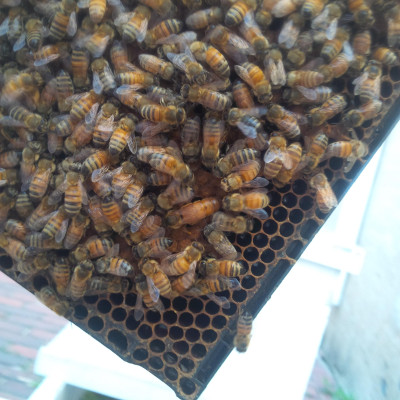 The queen does two things primarily: she lays eggs and regulates many of the colony's pheromones. Very similar to ants, bees regulate their behavior through pheromones, which are scents that act in the colony like hormones do in our bodies. Queens lay upwards of 1000 eggs per day at the height of the season. They can normally live from 2 to 5 years.

Workers are sterile females. They do almost everything in the hive and out. As they go through life stages and as the colony's needs change, workers will change jobs. I won't go through all the life stages and jobs of bees, but it is quite fascinating. They care for and direct the queen through committee, rear brood, clean, forage for resources, build, and guard.

Drones are male bees. They have no stinger. They do not forage. They have no allegiance to their queen. They roam from hive to hive, sipping a little honey here and there. They're also large, and are great opportunities for spreading pests. They're good for nothing. Except one thing: every day, they fly to similar areas to mate with queens that also somehow find these areas. If they mate, they die. If they don't mate, they are physically pulled out of hives by the workers as the weather turns cold, and die.

The Study of Bees

The "Father of American Beekeeping", the top talent whose tutelage we have all benefited from—inventing the modern hive and the beginning of accurate observation of bees—was a pastor born in America on Christmas Day: Lorenzo Lorraine Langstroth. Beekeeping helped him deal with severe manic-depression. He died at the age of 85 while giving a sermon on the love of God.

The preface of his book Langstroth on the Hive and the Honey-Bee, A Bee Keeper's Manual begins thusly:

This Treatise on the Hive and the Honey-Bee, is respectfully submitted by the Author, to the candid consideration of those who are interested in the culture of the most useful as well as wonderful Insect, in all the range of Animated Nature. The information which it contains will be found to be greatly in advance of anything which has yet been presented to the English Reader; and, as far as facilities for practical management are concerned, it is believed to be a very material advance over anything which has hitherto been communicated to the Apiarian Public.

Debarred, by the state of his health, from the more appropriate duties of his Office, and compelled to seek an employment which would call him, as much as possible, into the open air, the Author indulges the hope that the result of his studies and observations, in an important branch of Natural History, will be found of service to the Community as well as to himself. The satisfaction which he has taken in his researches, has been such that he has felt exceedingly desirous of interesting others, in a pursuit which, (without any reference to its pecuniary profits,) is capable of exciting the delight and enthusiasm of all intelligent observers. The Creator may be seen in all the works of his hands; but in few more directly than in the wise economy of the Honey-Bee.

Bee lineage is important. They come from different areas of the world and have different strengths and weaknessess. Just as you would rear cattle or dogs to hone certain traits, the same is done with bees.

The species used in backyards and industry are Italian, Carniolan, Caucasian, Russian hybrid, and now Minnesota hybrid. There are also African bees, but they're testy and stingy. Bees are native to the Americas, but no honey bees are! Italian queens are the most renouned. They've been favored particularly because they produce lots of extra honey, are calm and orderly, and are unlikely to swarm. 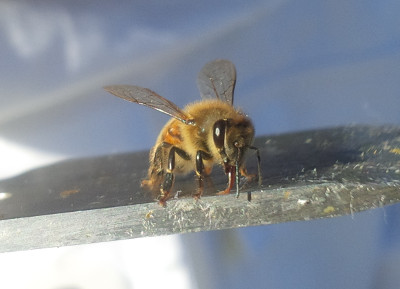 Check out that tongue! We call it a proboscis. It's basically a tube, and they can only use it with liquids. They will mix water with solids to be able to consume, e.g., salt or sugar.

Bees have an open circulatory system; they have one blood vessel running the length of their body, running down their back, that pumps blood from their bottom up to their head, where it splashes out into their body and is pulled back down to their bottom. This leaves them little defense against viruses, and emphasizes their pheromones and externalities like propolis for regulating and protecting their system.

About half of their "thinking" occurs in their abdomen, in the nervous system.

Bees have a second stomach-like pouch in front of their digestive stomach, that they can hold liquid in. They keep nectar, honey, and water here during transport and often have something at any time. The stomach can be closed off so nothing is digested.

When building wax comb, workers use the lengths of their antennae and legs to measure exactly where to build. When you have inter-racial bees in a hive, sometimes this causes confusion or will affect rearing. 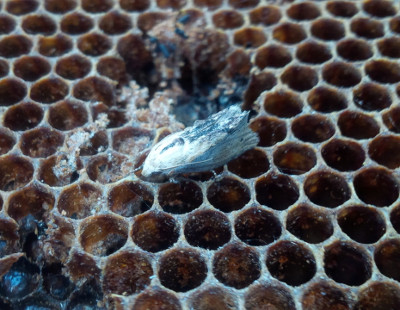 Apiarists are particularly hoaky about what harms bees. Everyone has their own story about what killed their bees. It wasn't me. It was the lightning that struck the hive.

In fact, bees should be largely left alone. The beekeeper is there as an insurance policy. A benevolent insurer who only charges you if you have more honey than you know what to do with. Unfortunately, opening their hive and checking on them sets back their productivity and surely kills a few along the way.

The major threats in North America that we focus on are varroa mites, small hive beetles, and wax moths. Lesser evils include ants, wasps, the cold, other mites, and pesticides.

Varroa mites are the most concerning threat to me. They come from Asia, and until a few decades ago, were only found there. Asian honey bees are more adept at handling them than our calm, well-endowed Italian bees are. They are nasty creatures, designed almost piece by piece to destroy our apis mellifera. They breed on the brood and eat their fat for the duration of the bee's life, leaving them vulnerable to viruses.

Small hive beetles, usually referred to as SHB's, are from our African honey bee sisters. They feed brood to their babies and coax bees to give them honey. Their hard shells are impenetrable to bees, but if you flip them upside down the bees will gladly destroy them. It's good to keep time in the hive to a minimum, but I can't help smashing the SHBs present when I open it up.

Wax moths aren't a problem unless you have other serious issues. They spread webbing everywhere and eat the wax your bees meticulously built.

There are many toxins in cities, but city bees are pocketed and diversified. Concerning toxins are in our farming processes. Farmers are incredulous of government and big agriculture chemicals, from past years of sales trickery. Still, chemicals are used. Anything that is dangerous to ants, wasps, or practically any other insect, is probably dangerous to honey bees. 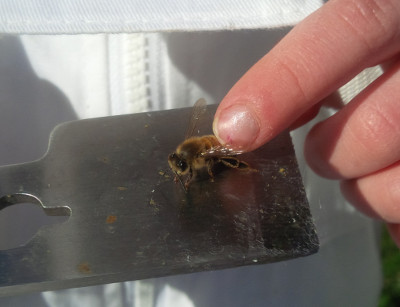 Many people are skittish of being stung. Bees are also wary of stinging. They are industrious, and will work themselves to death in the middle of a honey flow. Unless you are affecting their hive or step on them, they should not bother you. They are not predators like wasps.

The venom of a bee sting is a great chemical cocktail. It has a benefit: the anti-inflammatory chemical melittin. So beekeepers with arthritis can appreciate some respit with stings. After the first or second dozen stings in a season, they will have little effect on a beekeeper. But if you are stung 20 times at once, your kidney may fail the next day if not treated.

Worker bees only have one stinger. It has a barb at the tip, so it will stay in you. This is a little gross, as it pulls their entrails out, and they'll die. A muscle is left with the stinger, which will continue pumping venom into you as long as the stinger is in you. If you give the worker time, she can sometimes work her barb out of your skin or clothing and survive. But this isn't in your best interests, as you don't want the full dose of venom.

When they sting other bees, they are less likely to lose their stinger.

The queen has a stinger that does not have a barb, so she can sting at will. But she will not sting a human.

The older the worker, the more venom she has stored up. As bees age, their final task becomes guarding the hive. This is part of their ultimate economy; stinging will kill the bee, so better for them to have reached old age; and their venom is the greatest.

When workers smell an alarm pheromone, they will begin to get riled up. They will snap and push at each other, working each other into a blood rage, before charging their stinger into an enemy. As a beekeeper, we sometimes can see them bouncing off our vail, and know that they are in no good mood. Bees know that dark animals are enemies (like bears, racoons, and skunks), and can focus around faces and creases in your body and clothes.

Bees should be treated like cattle, not pets. They act all together as a superorganism, like a 14lb dog, and crushing a few is like losing a few hairs from their head. If you want to become a beekeeper, you should seek out a local club, gardens, or someone you know, to help keep an eye on them with you. A single nuc will cost a good $120-200, and it's encouraged to purchase one locally, if you have an apiarist you trust. Buying a complete hive kit is an additional $200. 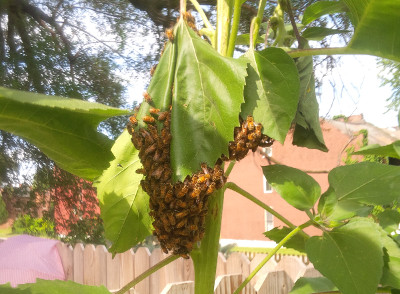 And you'll need to find a good place to put them. And a neighborhood that will take kindly to bees (or a good way to hide them from the locals!).

You'll likely lose a colony or two. You might lose colonies for years before successfully overwintering them.

Bees don't need you. But you will learn a lot about honey bees, native bees, ants, and many other insects, and how to observe and interact with a new species. Not to mention the honey.