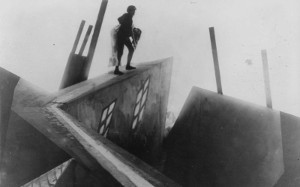 Conrad Veidt as Cesare the somnambulist, holding Jane over the city in The Cabinet of Dr. Caligari (1920)

I picked up John D. Barlow's book German Expressionist Film, and have been maneuvering the library's checkout policy ever since! It lovingly but critically covers the movement of the same name at the start of the 20th century.

If you are familiar with Expressionism then you probably don't like it, either because you don't like silent film or because the melodramatic acting, face paint, and stories are serious to the point of comedy. I understand your position, but evading silent film is not cool, and I have grown to love the contemporary farce that is passé expressionism.

But, in a way, Expressionism's outlandishness is its honesty.

Expressionism is a Post-World War I artistic movement that distorted appearances to communicate inner emotional states.[1]

It is a perspective overtly distorted by the artist, expressing its subjects' qualities through every part of the production—using the sets and props, the actors' movement, the costumes, and the story itself.

It shows the "inside" of its reality on the "outside." Architecture is often skewed in expressionist films, like in the city in The Cabinet of Dr. Caligari (pictured above), to show the base nature of the city. "Even the walls are crooked!"

The stories in the expressionist movement are very dark. They end sadly, and usually involve inhuman enemies and grotesque, bitter endings on par with Edgar Allan Poe from a century earlier. The movement invented vampires in Nosferatu, and the crazy scientist is personified in multiple films. Like socialist and communist movements around it, people are often only referred to by their position in society: mother, butcher, chef, pianist, etc.

As Barlow points out, German expressionism did not last very long, and is best known for its influence on later films. Some consider Citizen Kane German expressionism. It comes out in Welles' use of shots from the ground-up on Charles Kane and shots from the ceiling-down on his wife, showing his will over her. When Kane grows old and fat, it is not just a picture of the reality that people do grow old and fat, but that Kane's mind, purpose, and lifestyle—his pursuit of an empire—is old and fat. 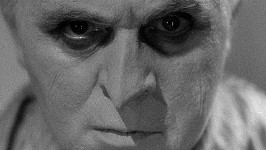 The Penguin of Tim Burton's Batman Returns has its roots in expressionism, as well as everything else by Burton.[2] Any time a person cackles and contorts their body, it's because of expressionism. The man's face morphs and his back arcs to show his inner character. He is not just superficially ugly, which would be trivial. He is warped and gnarled—warts, long nose, and all. Inside and out.

On Realism vs. Truth: The Merit of Expressionism

Allow me this tangent.

Realism is not honest. It is bound by the constraints and bias of a camera lens, just like anything else. It seems like a disownment of the very nature of your art; you can't believe that you can take away the reality of the medium.

Journalism studies points out that objectivity (i.e., realism) is not truly attainable. This is fine, if your audience is aware of it. Realism is deceitful by not giving its audience the chance to consider whether it is a truthful style or not, while other styles are overtly "deceitful"; they are self-aware that they do not represent reality, and furthermore depicting reality is not their intention.

The illustrious book Amusing Ourselves To Death (Postman 1985) explains some differences between forms of communication. Text — with its rules of grammar, of sentence structure, verbs for actions and nouns for givers and receivers — has an inherent logic. But film does not always have an equivalent logic to it. It can follow the structure of text, but it is unwieldy when it does. Has anyone critiqued a film for you and called it "bookish?" I think I've said that before.

Alfred Hitchcock made an infamous experiment to explain "montage" using clips of himself smiling, sneering, and frowning, each followed by an image of a woman sunbathing. Montage made sense of images in context, but you can use images one after another and make no sense at all! For example, without more context, it makes no sense to show a toy duck and then a hamburger and then a person in space. But the audience does not need — and may not have the opportunity — to refute the connections being made between images. 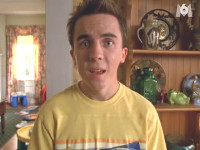 One of my favorite examples of a highly stylized TV show is Malcolm in the Middle. It's very skewed by Malcolm's childish perspective, but we understand him very quickly because of it. His mother towers over him, exploding with anger; his father is unbelievably timid and soft-hearted; and at times, Malcolm's own social ineptitude is washed away by his inherited strength, and he demands for reality to bend to his will. This open display of bias and emotion is why I love Expressionism, too.

Germany's Need to Express Truth in the Early 1900s

It is interesting to note the relationship between Expressionism and World Wars I and II.

It has been said that the expressionist movement was constantly pointing to the "inevitable" Nazi reign, though it was perhaps as much pushing the Nazi agenda and preparing Germans for the Third Reich as it was warning against it.

In 2008, Yukihiko Yoshida did a study called Leni Riefenstahl and German expressionism: research in Visual Cultural Studies using the trans-disciplinary semantic spaces of specialized dictionaries. The study took databases of images tagged with connotative and denotative keywords (a search engine) and found Riefenstahl's imagery had the same qualities as imagery tagged "degenerate" — the term Nazis used for German expressionism. Riefenstahl was a famous propaganda film director, but expressionists in general were persecuted and their work "publicly disclaimed" during World War II. 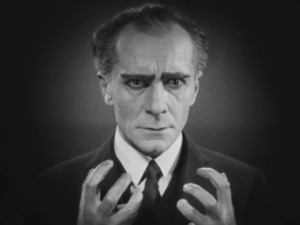 According to Hitler, when he wanted to go into painting the art schools told him he was too interested in architecture — his eyes were always distracted by the tall buildings around him. But he didn't have the academic background to go into that field. Fritz Lang was born only a year before Hitler in Austria-Hungary, and studied architecture in Vienna and then painting in Paris, so there was potential for them to get along. Lang's older brother even had the then-common name of "Adolf."

In 1924, as expressionism began to fade, Lang made a two-film series, Die Nibelungen: Siegfried and Die Nibelungen: Kriemhild's Revenge. They were based on German and Norse mythology, co-written by Thea von Harbou, who he married that same year (she wrote a number of screenplays with him). He made the films to lift the spirits of the German people. The country was devastated by World War I, and they felt unfairly forced to repair other countries at the same time as their own. The Die Nibelungen films were about the inherent good of the people. Lang wanted Germany to realize its worth — pick itself up and rebuild the country.

Hitler loved them, agreeing with Lang's vision of the German people as inherently better than everyone else — What terrible irony![3]

In a 1967 interview with the BBC, he said he made a third Die Nibelungen in 1932, called The Last Will of Dr. Mabuse, with Nazi slogans [in] the mouth of the criminal, but Nazis detained it and told him to see the Reich Minister of Propaganda, Joseph Goebbels. This from Lang's interview:

Goebbels was a very clever man, he was indescribably charming when I entered the room…He told me a lot of things, among other things that the "Fuhrer" had seen Metropolis and another film that I had made — Die Niebelungen — and the "Fuhrer" had said 'this is the man who will give us THE Nazi film'…and my only thought was 'how do I get out of here!'

Lang left Germany in 1933, but his wife, Harbou, stayed in Germany and continued to write under the Third Reich. Unsurprisingly, they were divorced by 1934.[5] Fritz Lang's movies in America are notably different from his work in Germany. Obviously a movie like Some Like it Hot is much more accessible than Between Two Worlds, but I wonder how much his ex-wife's writing and relationship influenced his work. Of course, the significant changes in his life and the world at the time would be enough to mark such a change in style and subject matter.

Modern Art & The Death of Expressionism

By the 1930s, German Expressionism in its pure form was dead. It was replaced by realism in the USA and surrealism in Europe.[6] They were all influenced by socialism and communism, and Expressionism was chained and locked in the basement, left screaming and banging, unable to prevent that candle from blowing out. And he never saw his love again. But one day, a lonely old man, passing the house by the tollway, heard the boy moaning. He opened the basement door and, always wanting to have a son, he took the boy to his terrarium, where he replaced the boy's hands with scissors and trained the boy to kill wild animals for food.

But Expressionism lives on, in an undead kind of way — or like a spirit inhabiting another person's body — in other films. It is no longer palatable to the world alone, but when you see a glimpse of it in a film, think about it, and appreciate the open emotion that it brings to your movies — that perilously open, embarrassingly open emotion.